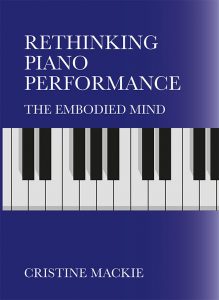 « In Rethinking Piano Performance: The Embodied Mind (2021), author Cristine MacKie  shows that to this day, piano pedagogy and piano performance continue to labour under the inheritance of that part of Western philosophy which separates the performer’s mind – and its ability to reason – from perception and bodily movement.  In Rethinking Piano Performance the author  supplants  this established belief, and argues that while the mind is self-evidently the site of mental phenomena, it is also fully embodied. This view is supported by the research of neuroscientists Damasio (2000, 2012) and Edelman (2007), who use brain-mapping technological tools such as functional Magnetic Resonance Imaging (fMRI) and, more recently still, Magnetoencephalography (MEG) which overturn the concept of duality. With this new evidence, the approval of  Prof. Antonio Damasio and the research of philosophers Lackoff and Johnson (1999) amongst others, the  book reveals  that preparing musical works for performance is not  just  a process of the mind, but may be shaped by our bodies – crucially, by the somatosensory system. »