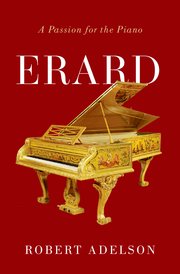 « Sébastien Erard’s (1752-1831) inventions have had an enormous impact on instruments and musical life and are still at the foundation of piano building today. Drawing on an unusually rich set of archives from both the Erard firm and the Erard family, author Robert Adelson shows how the Erard piano played an important and often leading role in the history of the instrument, beginning in the late eighteenth century and continuing into the final decades of the nineteenth.

The Erards were the first piano builders in France to prioritise the more sonorous grand piano, sending gifts of their new model to both Haydn and Beethoven. Erard’s famous double-escapement action, which improved the instrument’s response while at the same time producing a more powerful tone, revolutionised both piano construction and repertoire. Thanks to these inventions, the Erard firm developed close relationships with the greatest pianist composers of the nineteenth century, including Hummel, Liszt, Moscheles and Mendelssohn. The book also presents new evidence concerning Pierre Erard’s homosexuality, which helps us to understand his reluctance to found a family to carry on the Erard tradition, a reluctance that would spell the end of the golden era of the firm and lead to its eventual demise. The book closes with the story of Pierre’s widow Camille, who directed the firm from 1855 until 1889. Her influential position in the male-dominated world of instrument building was unique for a woman of her time. »