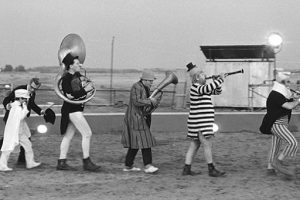 « The end of the Fascist era and WWii marked a watershed for Italian cinema. Gone were the well-polished style of the ‘telefoni bianchi’ melodramas, the apolitical levity of Mario Camerini’s Italianate screwball comedies, or the magniloquence of Alessandro Blasetti’s epics. The series of neorealist films that bridged the last years of WWii with the first of the postwar period brought a fracture with the style, themes, and topics of the previous cinema. Everyday life and outdoor locations were preferred over artfully arranged studio settings; regional dialects and vernacular speech patterns supplanted the artificial ‘received pronunciation’ and the literary eloquence of most of the past cinema’s dialogue; the themes indigence and underdevelopment, political struggles, and social injustice that would be silenced in the Fascist cinema gained a foregrounded position. Though neorealism per se was more successful at festivals and in film critics’ circles than with the general public, the innovations it introduced spilled all over the 1950s lighter and more popular genres – e.g. the sentimental comedies set in lower-class environments of the ‘neorealismo rosa’ – and sowed the seed for the more radical innovations of the 1960s auteur cinema. Film music too was caught in this change of tide. »