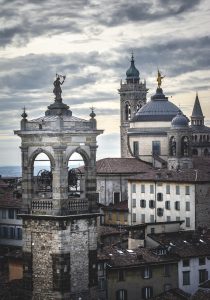 « Present day Bergamo is bifurcated into an upper and lower portion of the city by the Venetian walls, built in 1561-1623 to discourage Milanese northward expansion, as well as to limit contraband trade. Bergamo was one of the most important of the strong points fortified by the Venetian state in the sixteenth century, through its position at the end of the chain in acting as the true shield of all the other cities, as one of its officials described. Resting among the foothills of the Bergamasque Alps, it lies a mere twenty-five miles northeast of the Spanish duchy of Milan. Under Venetian rule, Bergamo was the westernmost fortress town of the Venetian Republic’s terraferma empire. In addition to the Milan/Venice border, Bergamo sat at an important crossroads between the Venetian Republic, German lands north of the Alps, and other Italian city states. This begs the question, why is a location such as Bergamo, crucial as both an interregional communication point between the Venetian Republic and other parts of the Italian peninsula, largely side-lined in Renaissance and Early Modern studies? »