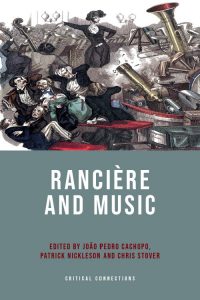 « The place of music in Rancière’s thought has long been underestimated or unrecognised. Rancière and Music responds to this absence with a collection of 15 essays by scholars from a variety of music- and sound-related fields, including an Afterword by Rancière on the role of music in his thought and writing. The essays engage closely with Rancière’s existing commentary on music and its relationship to other arts in the aesthetic regime, revealed through detailed case studies around music, sound and listening.

Rancière’s thought is explored along a number of music-historical trajectories, including Italian and German opera, Romantic and modernist music, Latin American and South African music, jazz, and contemporary popular music. Rancière’s work is also set creatively in dialogue with other key contemporary thinkers including Adorno, Althusser, Badiou and Deleuze. »