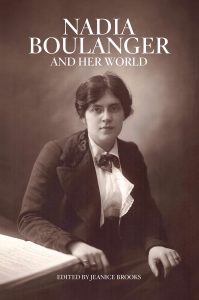 « Nadia Boulanger (1887–1979) was arguably one of the most iconic figures in twentieth-century music, and certainly among the most prominent musicians of her time. For many composers— especially Americans from Aaron Copland to Philip Glass—studying with Boulanger in Paris or Fontainebleau was a formative moment in a creative career.

Composer, performer, conductor, impresario, and charismatic and inspirational teacher, Boulanger engaged in a vast array of activities in a variety of media, from private composition lessons and lecture-recitals to radio broadcasts, recordings, and public performances. But how to define and account for Boulanger’s impact on the music world is still unclear. Nadia Boulanger and Her World takes us from a time in the late nineteenth century, when many careers in music were almost entirely closed to women, to the moment in the late twentieth century when those careers were becoming a reality. Contributors consider Boulanger’s work in the worlds of composition, musical analysis, and pedagogy and explore the geographies of transatlantic and international exchange and disruption within which her career unfolded. Ultimately, this volume takes its title as a topic for exploration—asking what worlds Boulanger belonged to, and in what sense we can consider any of them to be “hers.” »