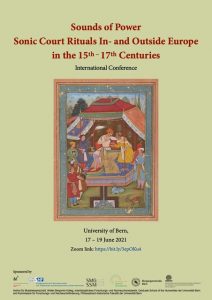 « Does power have its own specific sound? Or: How do sounds in combination with other media function specifically in courtly rituals of the premodern era? And: What reactions and associations did they trigger in the ritual community? These and other central questions are the focus of the SNSF project “The Sound of Power: Sound as an Intermedial Category of Courtly Festive Rituals in an Intercultural Perspective in the 15th – 17th Centuries”, which is based at the University of Bern. The focus is on the courtly cultures of the Ottoman Empire, with special attention to the circumcision ceremonies that Murad III held for his sons for a full 52 days at the Hippodrome in Istanbul in 1582, and various rituals of the Burgundian Habsburg sphere of the second half of the 15th century, such as the Banquet of the Pheasant in Lille (1454), the Trier princely meeting (1473) or the election and coronation of Maximilian I as Roman-German king in Aachen (1486). These events, among others, will be issued to demonstrate by a cross-cultural approach how sounds were involved in demonstrations, representations, and displays of princely power, and how power was expressed specifically in the medium of sound. Special emphasis will be laid on the performance and interaction between the media, since ritual and ceremony consciously made use of the different sensual worlds of experience in order to be emotionally tangible and experienceable, to trigger the desired effect of an exaggeration, even overwhelming. In this context, forms of idealization are also problematized, such as the perception of others in words, sound, or image, and the transfer between the different courtly spheres. The conference would like to broaden the view and include, in addition to the dynasties mentioned, other court cultures within and outside the European sphere and discuss fundamental anthropological tendencies of a model of domination and sound. »