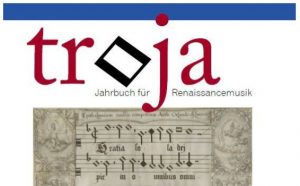 « On the occasion of the 500th anniversary of Josquin des Prez’s death, this year’s Troja-Colloquium for Renaissance Music is dedicated to the most prominent composer of the Renaissance and, in particular, to his reception during the long twentieth century. Almost as remarkable as the extraordinary esteem Josquin enjoyed among his contemporaries and throughout the sixteenth century is the rapid canonization of the composer since being largely rediscovered during the nineteenth century. After Rafael Georg Kiesewetter proclaimed the period 1480–1520 as the « Josquin Epoch » and August Wilhelm Ambros declared him to be the central figure in the third generation of the Netherlandish school, numerous experts dealt with Josquin the person and his music in the twentieth and twenty-first centuries, including through two rigorous, collected-works editions. In 2004 Paula Higgins explained this astonishing change as a type of mythification and provocatively compared it to the « Geniekult » surrounding Beethoven. This colloquium aims to revisit the major chapters of this development. In addition to following the musicological discourse, the colloquium focuses on Josquin’s popular dissemination, ideological appropriation, and the marketing of the musician, his music, and the image of a ‘great composer’ constructed in the process. Furthermore, students from the University of Mainz have conducted interviews with important figures for different areas of Josquin’s reception that will be presented at the colloquium: the highly-respected Josquin-expert Willem Elders and two major figures from German radio, Barbara Schwendowius and Harry Vogt at Cologne Radio WDR, both of whom have for many years shaped modern images of Josquin from the perspective of early and avant-garde music. »