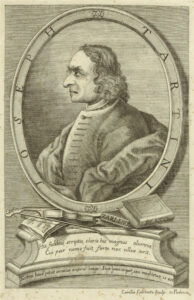 « The government of Slovenia has declared 2022 the year of composer and violinist Giuseppe Tartini, who was born in Piran in 1692. In honour of the 330th anniversary of his birth, the Wirth Institute for Austrian and Central European Studies at the University of Alberta, in collaboration with the Department of Music, is pleased to announce a symposium dedicated to the music, life and times of Tartini, to be held October 21-23, 2022 in Edmonton, Alberta, Canada. This symposium will take the composer and his works as its starting point, but will also consider Tartini in the broader context of the 18th century. We invite the submission of 200-word abstracts for scholarly papers (20-minute presentations). Topics/themes could include but are not limited to:

• Tartini’s influence/legacy/students
• The musical culture of Piran/the Slovene Lands in the Baroque era
• Tartini, Piran and the Habsburg Empire
• Tartini and the history of the violin
• Tartini and music theory in the early 18th century
• Tartini, poetry and religion
• Performing Tartini today

This symposium will include scholarly presentations, musical performances, and master classes. »