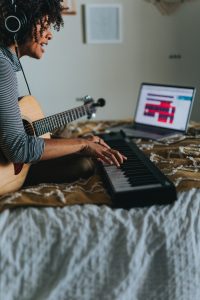 « The singer-songwriter is a mythical figure in popular imagination in different countries, a bridge between a variety and even contradictory forms of experience, both cultural and social. In the Italian context, it has been respectively interpreted in social history as a symptom of collective traumas (Bonanno 2009, Santoro 2010), and in popular music studies as a successful pop icon (Gentile 1979, Borgna 1995-2004), or as a genre (Fabbri, 1982) and – consequently – as an ideological construction (Tomatis, 2019). Only recently, has the transnational dimension of this phenomenon been stressed out and problematized further (Green and Marc 2013, Looseley 2013, Marc 2016).

The starting hypothesis of this call is that this production formula in the record industry emerged in Italy, influenced mainly by experiences in France and North America, in response to the social crises of the Sixties and Seventies. It offered a poetic account of the shared understanding of the time, as well as style models and fruition experiences perceived by the public as authentic. It gave life to an all-round communicative model, which could be used in different contexts and is still probably re-emerging in contemporary media culture. »