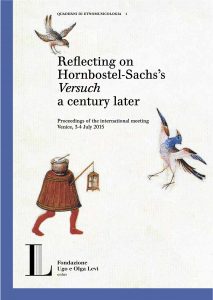 « The conference Reflecting on Hornbostel-Sachs’s Versuch a Century Later was the last international conference organized by Febo Guizzi before his untimely death. It was hosted by the Fondazione Ugo e Olga Levi in Venezia on 3-4 July 2015. The conference intended to celebrate the 100 years of the Hornbostel-Sachs classification, and for the occasion Febo Guizzi had invited international researchers whose noteworthy achievements had been published in recent years, and those who, although they did not work specifically on the Hornbostel-Sachs classification, could help with the historical background that led to the 1914 Versuch, and shed light on the relationship between the systematics of Hornbostel-Sachs, Victor Mahillon, and André Schaeffner. The conference was also an occasion to listen to some critical voices on the usefulness of the taxonomical approach in today’s digital era; and, in particular, on questions regarding the hierarchical structure and the problems posed by the class of electrophones, which Hornbostel and Sachs never developed.

Just a few days before the conference began, Febo Guizzi had achieved the final version of his Italian translation, which along with the results of his emendations, were shared with the participants. This version, both in Italian and in English, is now published at the end of these proceedings. »