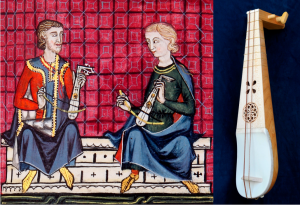 Colloque international « The Medieval Rabab. A Bowed String Instrument with an Arabic-Islamic Past and Present », Hochschule der Künste Bern, 5-6 novembre 2021.

« The skin-covered rabab was one of the most important bowed string instruments of the Middle Ages and the early Renaissance, besides the fiddle (and the rebec, which is not documented in written sources until the 14th century). The origins of the rabab in the Arabic-Islamic world date back to the 9th century, and detailed descriptions of the instrument can be found in the works of well-known Arabic authors such as Al-Fārābī and Ibn Sīnā (Avicenna) as early as the 10th century. After large parts of the Iberian Peninsula had been under Arab rule since 711 (al-Andalus), the rabab soon spread there as well and became part of European musical practice in the course of the Christian reconquest. For example, several depictions of rabab players can be found in the Cantigas de Santa María, written in the 13th century under Alfonso the Wise. Furthermore, an organologically very similar bowed string instrument, the North African rabāb, remains a key element of Moroccan and Tunisian andalusi music today. Therefore, the discrepancy between the numerous textual, visual and ethnomusicological sources and their lack of «resonance» in musicology and European music practice is all the more astonishing. »