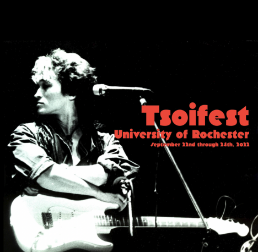 « The University of Rochester’s Humanities Project, Viktor Tsoi, Rock & Roll, and the Soviet State: 30 Years since the Death of the USSR’s Ultimate Rock Icon (Tsoifest) is a three-day international conference that focuses on the cultural legacy of Viktor Tsoi, the Soviet Union’s most influential and enduring rock star. (Tsoi died in 1990; the conference was delayed two years due to the global pandemic.) The goal of this symposium is to evaluate the role that Viktor Tsoi and rock music in general played in the collapse of the Soviet state and to educate students, faculty, and the community at large about the nature and power of popular music in the late Soviet period. Tsoifest will feature two academic panels, two keynote addresses, two film screenings with director Q&A, a roundtable discussion, and an evening musical performance by a UR alumni Viktor Tsoi tribute band Kino Proby. Leading scholars of late Soviet culture as well as Tsoi’s close associates and collaborators will attempt to establish a discourse of Tsoi’s cultural significance and national mythology from the perspectives of musicology, sociology, history, performance, media, and film studies. Tsoi’s position as an emblem of the collapse of the USSR sheds light on the ways his legacy is reinterpreted and reimagined within the former Soviet Union’s contemporary sociopolitical environment. Probing these cultural mechanisms is particularly important to our understanding of nationalist and increasingly isolationist attitudes in Russia in the wake of Russia’s war in Ukraine. »

Appel de conférences – « ‘Sicut in cælo, et in terra’. Commissioning and Production of Sacred Music in Italy from the Middle Ages to Today » – 5 mars 2023